‘We are experiencing what may be a hundred-year flood of hunger,’ says Oregon Food Bank’s CEO

Although many Oregon businesses have reopened and unemployment numbers have declined, local food pantries remain busier than ever.

The first few weeks of the coronavirus pandemic in March were filled with uncertainty. Pantries initially asked their customers to stay home while they rushed to figure out how to distribute goods with safe social distancing practices.

Five months later, the Oregon Food Bank reported about 100 pantries had closed statewide, out of 1,400. The sites that closed were primarily senior services centers that innately created high-risk environments, but the remaining pantries have thrived despite the new safety challenges and upswing in visitors.

“It’s been a great testament of teamwork,” said Ashley Mumm, Public Relations Manager of the Oregon Food Bank. “It’s just amazing that we have not heard of anybody turned away because there wasn’t enough food, except in one instance. We estimate that we will serve (more than) 1 million people this year, when in years prior, we were serving 860,000.”

In August, the state’s Department of Environmental Quality awarded the Oregon Food Bank a $140,000 grant to be used for transporting and processing excess food from West Coast growers. Due to the pandemic, much of the produce that would typically go to restaurants was headed for landfills. With the grant, however, 2 million pounds of fresh produce will be rerouted through food pantries instead.

“We are experiencing what may be a hundred-year flood of hunger — certainly the greatest food insecurity in at least a generation,” Oregon Food Bank CEO Susannah Morgan said upon receiving the grant.

Street Roots visited three Portland-based food pantries to see how they’ve adapted their operations in light of the pandemic. 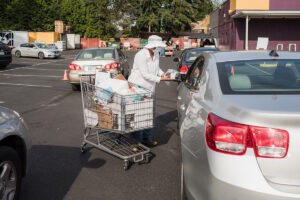