The ACS Disaster Response team at the Rocky Mountain Conference is leading the efforts in response to the recent Marshall Fire, the 6,000-acre wildfire that has destroyed 1,270 homes and businesses in Colorado. The estimates on damage exceed a half-billion dollars, making it the most destructive fire in Colorado history.

The ACS team, under the leadership of Cathy Kissner, Conference ACS director, has been at work serving at the Distribution Center in Broomfield for the past few weeks. The center which is located in Flatiron Mall at a former Nordstrom department store is operating seven days a week. Over 150 volunteers are working hard sorting, moving, and distributing goods to the affected communities. ACS will continue to lead this operation for the next three months or so, before turning it over to a local NGO. 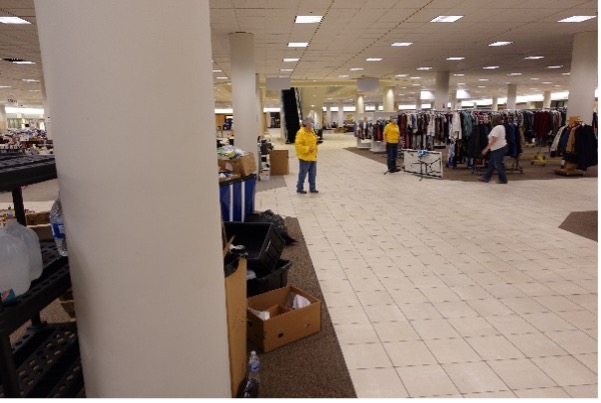 On December 30, 2021, multiple growing and fast-moving grassfires raged through the Colorado suburbs of Louisville and Superior at the base of the Rocky Mountains in Boulder County. These record-setting fires have destroyed more than 1,000 homes and property as powerful winds rained down embers on subdivisions that fires had never before touched. Tens of thousands of residents have been evacuated as strong winds continue to blow through these areas and spread the fire to homes.

North American Division Adventist Community Services (NAD ACS) has been in communication with the Rocky Mountain Conference ACS leadership, Colorado Emergency Management, and Colorado VOAD, to determine how our ACS DR teams will be utilized to render assistance to the communities in Boulder.

Let us remember the affected communities in our prayers.