Adventist Community Services Disaster Response (ACS DR) teams continue to assist with Recovery Efforts in Surfside, Florida. Donations are pouring into the Warehouse which are being sorted and categorized for distribution for families of those affected by the condo collapse. Local churches such as the Tabernacle Seventh-day Adventist Church are being utilized as Distribution Sites where the survivors and other community members can have access to these donated goods that include food, clothing, personal care kits, and other essentials items. Several areas surrounding the Disaster Site are shut down and multiple buildings in Miami have been evacuated due to safety concerns. The American Red Cross is helping displaced residents and emergency providers find a safe place to stay by setting up shelters in a hotel nearby, as well as offering their headquarters to house evacuees. In addition, we are working in coordination with them to provide counseling through our credentialed personnel. ACS Emotional and Spiritual Care providers are teaming up with Red Cross providers to render aid to residents and community members in various areas around the Disaster Site.

One particular survival story was told by a young lady who lived in the collapsed building. She explained to our Providers that her mother had saved her life. Upon inquiring as to how this was so, she went on to share that the only reason she was not home on that fateful night was because her mother had fallen ill earlier in the day. She decided to leave her apartment and stay with her mother that night just to ensure that she would be okay. As she spoke, she got emotional and our Providers offered to pray with her. Right there in the middle of the hotel lobby, our Providers prayed and asked God to continue to be with her and her mother. At the end of the prayer, she asked if she could receive a hug. Though as Providers we are careful with how touch is used, each of the Providers embraced and asked God to be with her. “There are more stories that could be told, but needless to stay ACS is participating in work that will have impact on those affected by this event,” said W. Derrick Lea, Director of NAD ACS.

Click here to read article on the Miami building collapse by NAD Communications.

ACS Disaster Response personnel from the Southeastern and Florida conferences assembled early this morning at Feeding South Florida in Pembroke Park which will be utilized as a Warehouse. It is located about 15 minutes away under normal traffic conditions from the Disaster site. This area of the city is shut down currently allowing only designated response personnel and residents within a 15-block radius of the site, and police are ensuring these restrictions are enforced through verification of credentials every other block. ACS conference directors Conrad Duncan and Robert Moore outlined the plan of operations for the team. Each person was designated with a particular role and then a tour of the facility was given to the entire team.

In addition to collecting the donated goods that come in, we have identified various Distribution Sites which include our local churches. We will utilize our ACS Volunteers to operate at these sites in order to be able to provide these goods directly to families of those affected. In addition, the team traveled to the Disaster site and met with Serve Florida at their Command Center. They discussed what support ACS would consider helpful which included travel cost coverage for our volunteers, increased messaging to the public of the donations that will be helpful, and transportation support for the Warehouse to deliver goods to those affected.

A 13-story condominium tower, Champlain Towers South, located near Miami, Florida, partially collapsed in the early hours of June 24, 2021 morning. Sixteen people have been confirmed dead and around 150 unaccounted for. We are working together with the ACS teams at the Southern Union Conference, and Florida and Southeastern conferences who are assessing the situation in order to determine how to best serve the affected community. The local authorities of Florida State have requested ACS to assist with Warehouse operations. ACS Disaster Response (ACS DR) leadership from both conferences are working in a coordinated way to form a Warehouse Management team and are in discussion on how the Recovery Efforts will take place. ACS Directors Robert Moore and Conrad Duncan have each identified trained members from their conference that will outfit this team for 24 hours a day during the first week of operations. 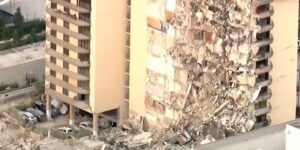 In addition to the need for a State Warehouse, we are also attempting to set up Distribution Sites for community members. We’ve also been asked by the American Red Cross whether our Emotional and Spiritual Care Providers could be utilized to provide assistance for families affected by this tragic event. We will be in discussion with them to determine the particulars of this assignment for this phase. Since Florida has been the site of several challenging circumstances, we have credentialed Providers who are ready to be of service. W. Derrick Lea, Director for North American Division Adventist Community Services, is currently onsite meeting with our ACS team members at the Warehouse to put the operational plan in place, set schedules of those assigned, and collaborate with authorities responsible for overall Response in the community. “The days will be long, but we trust that many will be helped through our efforts, and that those who observe us will see Christ working through us,” said Lea.

Please keep the individuals and families who have been affected by this tragedy in your prayers.