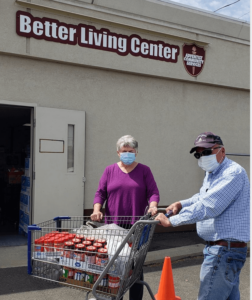 The Better Living Center (BLC) in Spokane, Washington, and Portland ACS Center (PACS) in Portland, Oregon, are two of the several ACS centers that are actively serving individuals and families affected by the COVID-19 pandemic. They’ve shared with us stories of how they’re helping those in need. Last week, a man walked into the BLC looking for socks and shirts. He was grateful that the Center had them, but he was more excited about the jar of peanut butter he received. He was so excited that he went to the corner of the asphalt parking area and ate the entire 16 ounces in one sitting. The BLC is thankful for volunteers and generous supporters that allow them to keep their doors open during this pressing time.

Here’s another story that was shared with us by Portland ACS Center (PACS) Director, Laura Pascoe. Laura’s husband had posted something on Facebook recently with a Bible text that mentioned ‘The Harvest’. A guy commented on the post saying that he wished there were more harvest around since food is getting scarce in that area. Realizing that he might be in need of food, Laura’s husband texted her asking her if she could bring one of the food boxes from the Center. She said “Sure!”, and before she left work that day, she put together a box for her husband to take to the man. He looked through it and saw that there was enough onions and potatoes to feed them for months. He shared some with his mom, his daughter, his sister, his friend and her family.

He called Laura’s husband back and expressed his gratitude by saying, “You don’t know the gift that you just gave me. Not only do I have food in my house now, but I was able to go be a blessing to four of my other loved ones because of what you gave me. Thank you so much.” Less than a week later, he tagged both Laura and her husband on Facebook saying to call him. Laura’s husband called him and he said that he’d like to meet him. He had gotten his stimulus check and wanted to donate $240 to them because he was so thankful for what they gave him. “I know that PACS will use it to help people because it’s helped me already. It changed my life,” he said.